Every year since 2000, data on R&D expenditure in the public and private organizations in Thailand are compiled and the total expenditure has increased steadily since 2011. The recent survey – conducted by the National Research Council of Thailand – collecting the 2020 data revealed the gross expenditures on R&D (GERD) to be THB 208.009 billion THB or 1.33% of GDP, compared to 1.14% in previous year. Of this amount, THB 66.304 billion THB (32%) was contributed by the public sector, whereas THB 141.705 billion (68%) by the industry. The public investment portion rose by 10% from the previous year. To achieve the 2027 target of 2% GERD, more measures are required to stimulate R&D investment in both the public and private sectors, especially between 2022-2024 as the country faces the set-back caused by the pandemic.

The 2027 targets for higher education, science, research and innovation are: 1) The number of innovation driven enterprises (IDEs) with THB 1-billion revenue reaches 2,000 and the creative economy grows 1.5 times higher than the average household income; 2) The proportion of high-skilled worker rises to 25% through the high-skilled human resource development platform; 3) A platform is established to boost social mobility for 1 million people; 4) 50% of exporters achieve carbon neutrality and zero emissions. To meet these targets, a three-pronged strategy was proposed to enable the transition. The strategy consists of a knowledge-based industry, a creative & culture-based industry and a local economy.

The knowledge-based industry is developed through the innovation economy. The focus is placed on increasing the number and quality of IDEs and aligning the research and innovation with the direction and requirement of the national development. Among initiatives that NXPO has launched are the circular economy (CE) model, an innovation ecosystem platform, CE Innovation Policy Platform and CE Design & Solution Platform.

Understanding and taking inventory of cultural capital is the first step of the creative & culture-based industry, followed by the application of science, research and innovation to create economic value out of the cultural capital. The creative & culture-based industry is also promoted through, for instance, the development of creative-industry entrepreneurs, building the network to support creative businesses and joining the UNESCO Creative Cities Network.

The local economy is promoted through the creation of social enterprises, the development of IDEs and the public-private-people platform. Programs that have been introduced include targeted poverty eradication and University to Tambon (U2T) in which universities utilize their potential, technology and innovation to drive the local economy and community development.

In addition, the new skill for new economy and lifelong learning initiatives aim at developing workers’ skill at 100,000 workers/year.

Other measures that are being implemented include Thailand Research and Innovation Utilization Promotion (TRIUP) Act B.E. 2564, Thailand Plus Package that promotes STEM employment and training, Mekong-Lancang Route No.1 Innovation Economic Corridor, Innovation Fund for SMEs contributed by the public and private sectors, higher education sandbox and the establishment of Science, Research and Innovation Fund which received a THB 17 billion budget allocation for FY2023 from the government.

Furthermore, the higher education, science, research and innovation system reform has taken place in four areas: 1) budget reform with an introduction of multi-year budget management and block grant, 2) management with the mapping of science, research and innovation data for strategy and planning, 3) system reorganization with an establishment of PMU-A, PMU-B and PMU-C, and 4) innovation ecosystem with a new Thailand Business Innovation Research scheme. 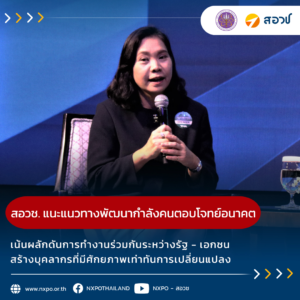 NXPO joins discussion on talent management for the future 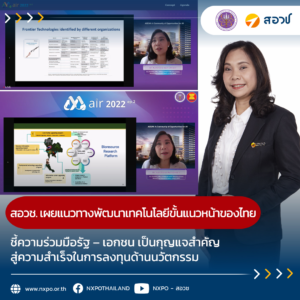 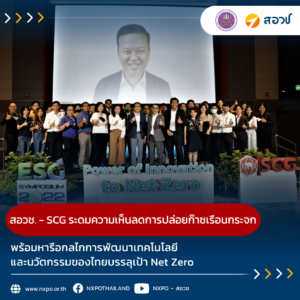 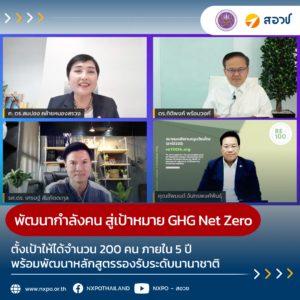